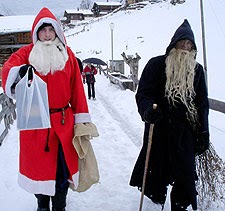 "December 6th is a big day for swiss kids: Tonight, thousands of swiss kids will receive a visit from Samichlaus — that's Swiss German for St. Nick — and his black-clad henchman, Schmutzli. Kids usually await his arrival impatiently and slightly frightened. Samichlaus knocks on their door, enters and consults his big book of sins — co-authored by village parents — and does some light-hearted moralizing. Kids can earn a little forgiveness by reciting a poem. After this and some assurances that they will reform, Samichlaus allows the children to reach deep into his bag for a smattering of tangerines, nuts, gingerbread, and other treats." - from swiss miss!  (Picture originally uploaded by Rick Steve)

i love hearing this story from Daniel!  his stories about Schmutzli are actually a lot more terrifying than what's written above.  next time you're in the shop, ask him.  him and his older brother were terrified!  that is until his kindergarten teacher told him the truth about Samichlaus.  can you imagine?  he ran home crying...what a teacher - shattering the dreams of little swiss 5 year olds.