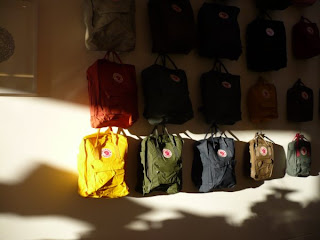 great lineage: "founder, Åke Nordin, with the help of the Swedish Guide and Scout Association, immediately sketched a reasonably priced, functional backpack that had plenty of space for school children’s folders. The Kånken backpack was introduced in August 1978. The arguments in favour of the school backpack had already taken root with experts.  However, the new backpack would awaken unexpected emotions. Kånken was marked by some as a symbol of liberal political views and sometimes called 'the communist hunchback'. But none of this bothered Åke. He estimated that he would sell 200 Kånken its first year. He sold 400. The following year sales reached 30,000 and the backpack was officially a success."
yeah for Åke! 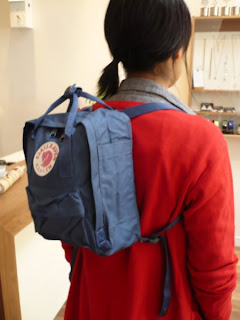 we have the 'mini' (photographed above and worn by the lovely amanda), the 'classic', and the '17" laptop'.
made of "Vinylon F; functional fabric that has made Kånken daypacks seemingly immortal for the last 25 years."
made in sweden and socially responsible too.
to read more about this, click here:  fjallraven