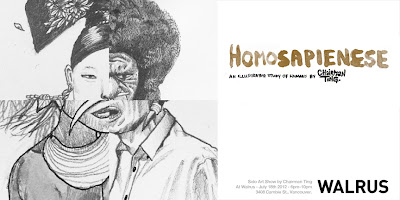 "Carson graduated with a Bachelor of Design from the Ontario College of Art & Design.  During the day he works on the global digital Nike account for the Jordan brand at Blast Radius and at night he runs an experimental illustration workshop called Chairman Ting Industries.
He has been named as one of the top 200 best illustrators worldwide by Lürzer’s Archive magazine and also voted as one of the top 5 most creative people in Canada by Marketing Magazine.
His artwork has been commissioned by adidas Originals for exhibition in both Hong Kong and Shanghai. During the winter Olympics in 2010 his work was also featured in the Vancouver Art Gallery. Currently his work is exhibited at the San Jose Tech Museum in California.
Carson has been honoured at Cannes, LIAA, Communications Arts, Creativity, New York Festivals, Lotus, ADCC, IdN and BBC’s Commercial Breakdown, featuring the world’s funniest commercials."
join us this wednesday evening july 18  for our opening celebration
6 - 10pm
here at walrus
http://www.carsonting.com/