this team is serving up ceramic art.  when clients shared their love for these pieces with us, we had to take a closer look... 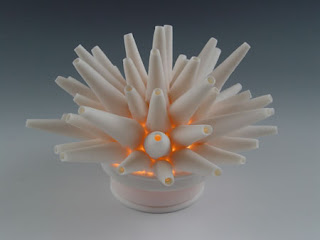 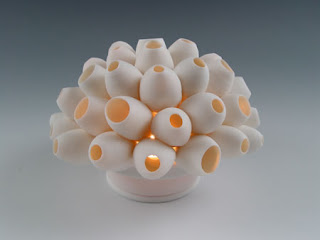 "Lilach’s first encounter with Clay was in 2000. Having studied Ceramics Design in Israel’s top academy for the Arts – the Bezalel Academy, after which she and her husband Ron have immigrated to Canada in 2003, and soon settled in the beautiful town of Ladysmith (and in 2007 - moved to Nanaimo), on Vancouver Island, British Columbia. A young and fresh spirit has been brought with them, and soon defined a Signature Mark onto the local pottery scene.
Lilach is a recipient of the 2009 BC Creative Achievement Award for Applied Art & Design, recognizing her innovation and design in Ceramics. She had also received the 2008 One of a kind Award for Excellence in all Craft Media, Western Canada. Furthermore, a THREE TIME recipient of the coveted 2010, 2007 & 2006 NICHE Award."
each piece is hand done and unique unto itself, and when lit....stunning.