let's clear this up before the weekend, shall we?

macaron vs. macaroon vs. luxemburgerli vs. makaron
"A macaron (French pronunciation: [makaˈʁɔ̃])[1][2] is a sweet confectionery .... The macaron is commonly filled with buttercream or jam filling sandwiched between two cookies. Its name is derived from an Italian word "maccarone" or "maccherone"...
The confectionery is characterized by its smooth, domed top, ruffled circumference (referred to as the "foot"), flat base, mildly moist and easily melted into mouths.[4]
Since the English word macaroon can also refer to the Coconut macaroon, many have adopted the French spelling of macaron to distinguish the two items.. However, this has caused confusion over the correct spelling of the cookie/biscuit... 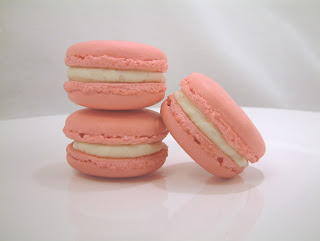 In Switzerland the Luxemburgerli (also Luxembourger) is similar to a French macaron but is said to be lighter and more airy in consistency.
Macarons are popular confection known as "makaron" in Japan.[12] There is also a version of the same name which substitutes peanut flour for almond and is flavored in wagashi style, widely available in Sendai, Japan."
thank you wikipedia.  now for this weekend - tastings and freshly made batches from this young local talent will be available in beautiful flavours and in packs of sixes...
saturday 10am - 5pm
sunday 12pm - 5pm