we are so lucky, not only do we have amazing clients, but amazingly talented clients.  we've recently been stocked with some clever canadian tees.  we've been big fans of evoke international design's work for years now, and as part of their creative outlet, they've come up with a collection of 'evokativ' tshirts: 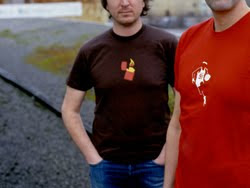 what makes them so special?  they say it best...
"Our Canadian Series attempts to stir emotional pride in the history and culture of this great wide land, beyond the usual patriotic jingoism of maple leafs, mounties and moose.
It's not about Canadians 'kicking ass'. It's about downing beers in your local bar and discussing the merits of a Prime Minister putting a choke hold on a protester. It's about watching hockey and telling the story of The Habs fan who tried to steal the Stanley Cup. It's about the yodeller who travelled the railways and became a star.
It's about who we are and what we do."
each t-shirt comes with its own story. pop in and get a lesson in our Canadian history.